Fascinating
The other day, I had a conversation about different cultural values and the consequences of it. In business and in social life. Something I come across every day now, of course. It is because I am living in a country in which I was not born in. Next to that, it is because I am part of an international community. Moreover, I am from the Western part of the world and live in the East part of the world now. It can be frustrating, but it is fascinating at the same time. Sometimes I just don’t get ‘it’, when I really want to. And sometimes I am in a position to observe and see what happens and enjoy what I am learning about and from it.

The spiral of Creation 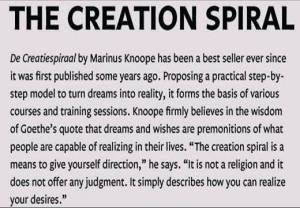 It reminded me of a book I read, some time ago. It is called ‘The spiral of creation’ or in Dutch ‘De Creatiespiraal’ by Marinus Knoope. In this book, he describes a model to turn dreams into reality. Recently, I also read the ‘Secret’ which is about the same subject but with a slightly less practical approach. But of course, ‘The spiral of Creation’ is written by a Dutchman. :-)

At the beginning of the book Knoope quotes Goethe: “Wishes are premonitions of what you are able to accomplish in real life.” Knoope has been puzzled and doing a lot of research on whether one is really capable of designing one’s own life, or if there is something as predestination. Knoope does agree with Goethe. He adds that whether you really do this depends on circumstances and these circumstances you can create yourself. And then he built a model to do that. 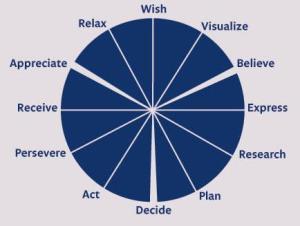 What is your preferred activity?
Now when you had your first look at his spiral of creation; what word caught your eye first? Where did your attention go? Where did you stop a bit longer? Maybe the activity you like to do the most. Are you a dreamer or are you a ‘do-er’, for example? We all have our preferences. And probably, at least deep down, we all know at which activities of the circle we are good at and which ones we’d better leave to others.

East, West…..
And this is why I thought of this book yesterday. Knoope says you can draw a parallel to the four big cultures of the world. The Southern cultures are very good at the right upper part of the spiral of creation, namely wishing, visualizing, believing, expressing. The Western cultures do well at expressing, investigating, planning and deciding. The Northern cultures you best ask to decide, act, persevere and receive. The Eastern cultures then outshine others in receiving, appreciating, relaxing and wishing. Looking at it from this point, each of the four cultures is in a state of imbalance when on it’s own. Knoope concludes that each of the four cultures should realise this, understand accept and respect each other’s preference, in order to realise a harmonious society. 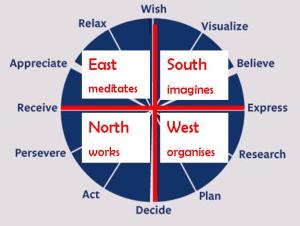 Can we be optimistic?
I wonder; are we, is the world heading for this? Will evolution take us there eventually? Will we get to a stage, where it will be part of all cultures to adapt this inclusive way of living and working? In many situations, I do not get the impression we are. So often people put emphasis on their differences and try to convince the other that their own perspective, goal or vision is the best. Whereas we also can start with trying to understand the other’s point of view. Which still does not mean one is right and one is wrong. Trying to understand someone’s point of view opens up perspective and could maybe lead to developing a better one, a better goal or a better strategy.

We can
Not often, but sometimes, when I look back in history, I become optimistic. Because we have come a long way. We are developing on this scale of inclusiveness. Let’s face it, some ten years ago the word inclusiveness was not even used as I recall. Nowadays, every good leadership program pays attention to it in some way. So I will keep on wishing, imagining, believing, expressing, researching, planning, deciding, acting and persevering to pay a contribution to this path to inclusiveness and a harmonious society!

WorkwithWomen (as well as WerkmetjeGezin) is an initiative of Patricia Handels. Patricia has a master in international economics since 1998. She has worked for 10 years in marketing & sales in the financial industry in Europe. For almost 4 years now, she has been working as a consultant and coach in talent management. She has worked for different companies and with both female and male clients. Female leadership in organisations has had her special attention for years and has become her specialty.
View all posts by WorkwithWomen →
This entry was posted in Building bridges, creatiespiraal, cultural diversity, diversity, Eastern cultures, encouragement, inclusiveness, Inspiration, Western cultures and tagged business women, cultural differences, diversity, East, expats in Kuala Lumpur, female leadership, Inclusiveness, inspiration, personal development program, West, work with women, working in asia, workwithwomen. Bookmark the permalink.